From Time-Shares to Rain Showers: A Week in PV

Last week, I embarked on my third trip to Mexico in under one year.  Despite my various visits, I am still learning the mysterious ways of Mexico. 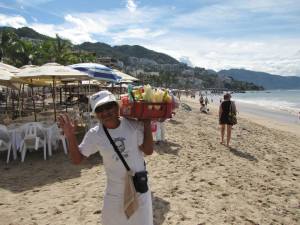 Puerto Vallarta is a stunning sea-side town, rimmed with misty mountains and deep beige sand.  With a growing population of around 250,000 people, I visited Puerto Vallarta during the second busiest time of the year: New Years (the first is Easter).  While Cancun is known for its Spring Break party scene and Mexico City is bursting with culture, Puerto Vallarta offers a unique flavour that is still distinctly Mexican.

Puerto Vallarta was a thriving Mexican village well before it became a hot-spot for tourists.  PV’s extraordinary scenery, welcoming citizens, and mild climate attracts thousands of Canadian, Mexican, and American visitors every year.  Without the tourism industry, the future and freedom of the country would be much more vulnerable to outside influences, as it was in the past.

Having traveled to Mexico previously, I knew to expect eager salesmen awaiting our arrival in the airport.  My mother and I tried to walk past them, stone-faced, but it was only too apparent we had no idea where to go.  We were whisked away by a desk receptionist promising us free tours, tequila, and taxi rides – in exchange for a “one-hour breakfast” time share presentation. 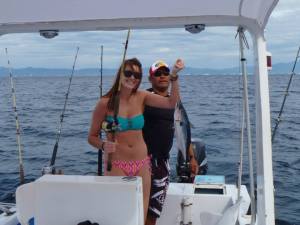 We were reeled in like fish on a sparkling hook, willingly taking the bait.

The next morning, we were picked up at our old but adequate resort, Villa del Mar, and whisked off to Nuevo Vallarta where we  endured a four-hour show-and-tell that we literally had to cry our way out of.  Four employees rang through us, dropping the cost of the unit by hundreds of dollars, until they finally realised we weren’t buying.

Was it worth it?  I guess so—it was pouring rain in the morning, so we didn’t miss out on any beach time.  The company followed through and we received our “free gifts”, along with a bottle of champagne to dry our tears.  But I’m in no rush to do it again.  Just like the rest of the world, everything in Mexico has a price. 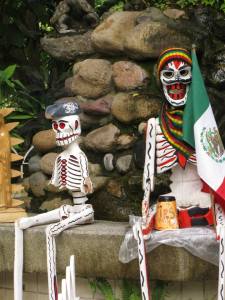 The peddlers on the beach promise you it’s “almost free”, the resorts carefully highlight and shade certain areas, and the tour guides all work together for commission.  It’s enjoyable to indulge, but look behind the scenes and get out on the streets to find the real Mexico. 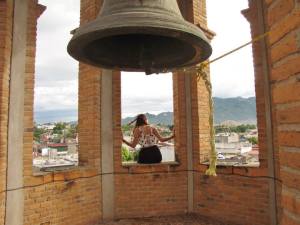 I’m going to be perfectly honest: I’m not a vacationer.  After a couple days of paradise, I get a craving for the exotic.  And so, along with a few tours and directionless wanderings, my mom and I began to explore. 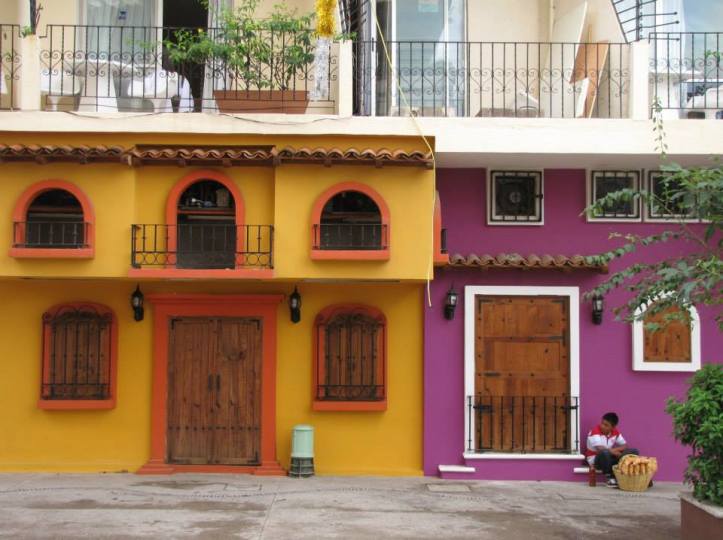 I was walking around the pier at dusk, taking snapshots of the sunset, when three giggling girls and their bashful brother caught my attention.  The eldest struck up a Spanglish conversation with me.  They were so excited that I simply acknowledged them, and grew even more ecstatic when I agreed to take their picture.  I waved my arms around in an effort to say, “Make a silly face!”  Sometimes, you don’t need words: their smiles say it all. 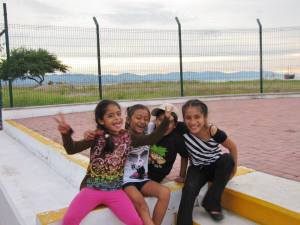 An authentic Mexican circus across the street from our resort beckoned my mom and I into the grungy arena where we watched drugged tigers and under-paid acrobats impress the (mainly) Mexican audience.  One of the performers offered me his card, perhaps hoping I could bring him fame home in Canada.
On our fishing voyage, another type of entertainment ensued.  At the promise of colourful swarms of fish, my friends and I dove into an ocean overflowing with jellyfish.  We nursed our burning skin as local cooks smoked the fresh fish we had caught moments ago. 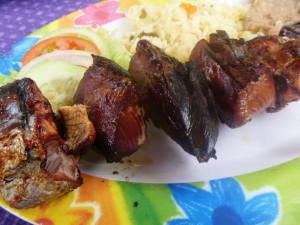 Mexican food is spicy, fresh, and delicious.  The smartest way to find the best food is to look where the locals eat.  Restaurants full of white tourists will cater to white tourists.  (If you want a burger and fries, you should save yourself the airfare and stay home.)  My favourite Mexican dishes are tortilla soup, cheesy nachos, and fish tacos.  Local, smaller, smellier places crammed with sweaty bodies and fresh seafood will serve the freshest catch at the cheapest price. 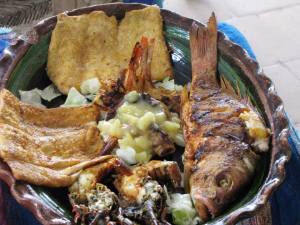 Never forget, you’re running on Mexican time.  Tours will start hours late, buses won’t run when they should, and a “short afternoon” can easily stretch into a long day.  Expectation vs Reality can be a hard pill to swallow, especially when you’re mulling over a pristine-looking cruise ship on a pamphlet that ends up looking like this: 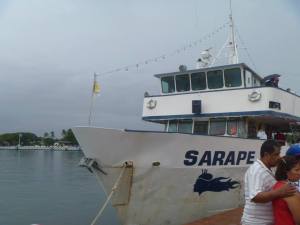 Similar to Italy and Spain, nearly everything for sale by peddlers on the beach, in the markets, and by anyone not in an established store (and even then, sometimes) is fake.  Ray bans, floppy beach hats, guitars—everything you could want (and more then you’ll ever need) for $1.  Remember, the tequila you buy in the store probably won’t be the same shot you sampled, and the souvenir you bought is likely to break on the flight home.  Know what you’re getting, haggle the price low (but don’t offend), or just shake your head and save some cash for Corona calories. 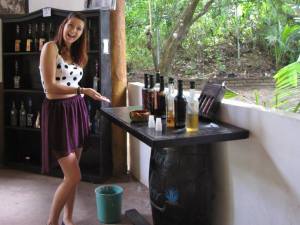 Speaking of Cervesas, the Mexicans pride themselves on their alcohol abundance.  They will give it to you for free, anywhere, however much you want, anytime—if they think they might make some money off you in the end.  It’s a brilliant sales tactic—get them drunk, take their money.  Keep your purse zipped up and indulge!  It’s always five o’clock in Mexico. 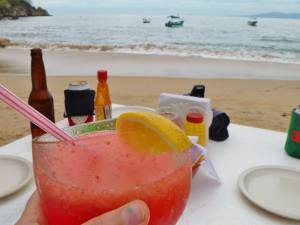 Unfortunately, the sun can’t shine everyday—not even in Mexico.  The constant drizzle made my favourite city in the country – over Los Cabos and Playa del Carmen – seem drab, grey, and rusted.  I was lucky I brought a rain jacket, sweaters, and endless books to keep me occupied.  Even still, the crying skies couldn’t keep my mom and I inside—we managed to meet some Americans and have a good time! 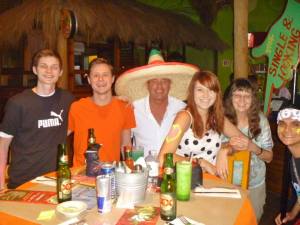 After all, this is paradise! 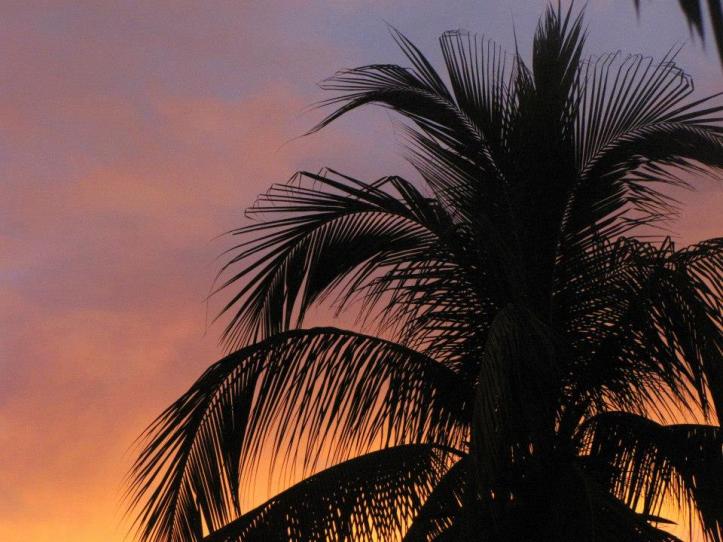